Defence Minister Rajnath Singh has announced the ‘Agneepath‘ scheme to recruit soldiers in the Indian Forces for 4 years. He said that the Cabinet Committee on Defence has taken a major decision to make the Indian Army the best army in the world.

What is Agneepath Scheme 2022?

Explaining the scheme, Agneepath Yojana Army Bharti Lt Gen Anil Puri said that the scheme will give youth power to the armed forces. This will improve the level of fitness. At present, the average age of the Indian army is 32 years. With the implementation of this scheme, it will be reduced to 24 to 26 years.

This Scheme was drafted two years ago, in which the doctors who retired in 2017 were brought back in the first experiment. According to the Loksatta report, there is a shortage of more than 1.42 Lakh positions in the Indian Army that can be filled up by Agniveer under the Agneepath Yojana.

They will also get the support of the Army in the application process. This government scheme will keep the best youth in the Army even after three years, and the rest will be relieved. Army Officials have made presentations about this to high government officials who have supported the plan.

The government is determined to implement this Scheme for the entire army recruitment to eliminate the magma. This will benefit lakhs of youth, and the whole public and private sector will also benefit because of the morale of the child who will come back after serving in the Army.

Benefits to the Agniveers

Agniveers will be given an attractive customised monthly package along with Risk and Hardship allowances as applicable in the three services. On completion of the engagement period of four years, Agniveers will be paid one time ‘Seva Nidhi’ package which shall comprise their contribution including accrued interest thereon and matching contribution from the Government equal to the accumulated amount of their contribution including interest as indicated below: 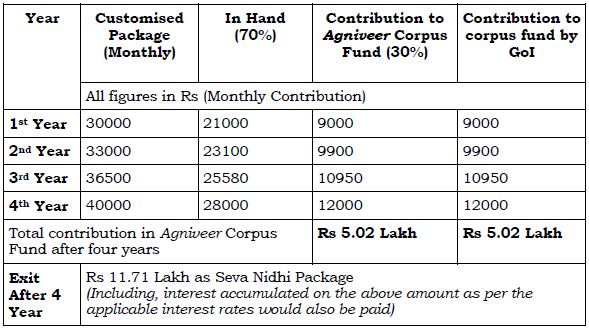 The criteria are different for the posts of soldiers and officers in the new recruitment scheme. Only officers retiring from the Army will get the opportunity to hold official positions. Agneepath Yojana Army Bharti This concept is different from a short-term service commission. The officer can serve in the Short Service Commission for a limited period of up to 14 years (with increments).

They do not get pension benefits. Officers have completed 30 years of life at discharge from military service. Therefore, it is difficult for them to start fresh elsewhere. In this situation, the people concerned will have the opportunity to return to military service. However, there is no retirement benefit

The main purpose of central government is to introduce the Indian Army Agneepath Entry Scheme with the aim of training the youth and to make a cut in retirement as well as in pensions. Agneepath Yojana Army Bharti Indian government has come up with this scheme in order to strengthen our security forces and also to bolster the strength of our Indian Coast Guard Recruitment. Selected candidates will be trained professionally and then they will be recruited within the areas like Jammu and Kashmir border.

The main thing to focus about this recruitment is that there will be no entrance test for the youth. However the candidates enlisted under the scheme will have to go through a longer training, effectively for at least two years for a four-years term, in order to make them ready for joining Indian AirForce Recruitment as professionals.

There will be the recruitment of Soldiers & Airmen under this scheme. The age should be between 17 and 21 years.

What will happen after four years?

After four years, Agniveer can apply for the regular cadre. The Army will provide permanent service to a maximum of 25% of the Agniveers of a batch. If Agniveer decides to join the Air Force or the Navy, he will be given special training.

What will be the salary of Agni Veers?

In the first year, Agneepath Yojana Army Bharti the Agniveers will get a salary package of around Rs 4.76 lakh. It will increase every year. In the fourth year, the salary will increase to around Rs 6.92 lakh.

The Guardians of the Galaxy Holiday Special Download Available on Tamilrockers